There is nothing quite like a spontaneous getaway. When I was younger, the wanderlust would take over and I would just go. Anywhere. On a dime. As a parent, I have to work around school schedules and other responsibilities. Throw in peak travel crowds and a few other variables, and trip planning can sometimes take a backseat.

This spring break was no exception. Each time I came up with a brilliant vacation idea, it was somehow thwarted (mostly by other travelers who had planned well in advance). So when a last-minute hotel finally opened up in St. George, a drivable distance away, I jumped on the reservation without hesitation. And we were off on a last-minute spring break vacay. Destination: St. George in southern Utah. 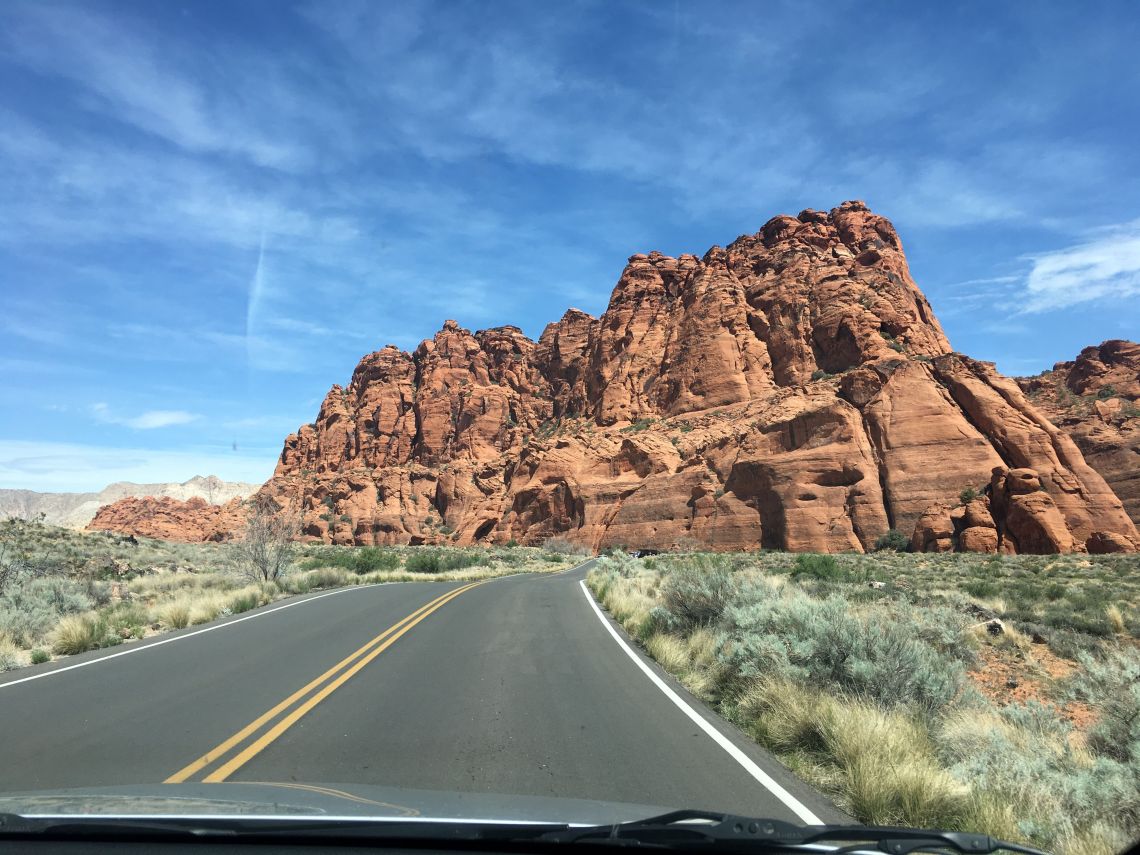 We checked into the Best Western Abbey Inn early Friday evening, and then headed over to the Black Bear diner for a quick dinner. There are actually two Black Bear diners near my home, but I’ve never been. The food was quick and delicious comfort food.

After dinner we headed down to the heated outdoor pool. It was fairly small, and packed with tween and teen softball players in town for a tournament, but we still enjoyed the late night swim beneath the warm St. George evening air. We followed p.m. pool time with a soak in the hot tub. The dark tile and odd shape gave it a dark, cramped feeling. (In all honesty, you would not want someone you didn’t know sitting directly across from you in the narrowest part of this hot tub!)

After a shower and a DQ run, we settled down for the night. I don’t know what it is about hotel rooms, but I can never sleep the first night. (Apparently, I’m not alone.) Luckily, a swim in the cool morning air left me feeling refreshed after too little sleep, and we were ready to head out to Snow Canyon State Park.

Snow Canyon is a 7,400-acre scenic park tucked amid soaring sandstone cliffs and decorated by lava fields and a strikingly beautiful desert landscape. I was in awe of the colorful contrasts of red rock, black lava, and desert sagebrush beneath the backdrop of brilliant blue skies and the fluffiest white clouds. We took the short walk to see the pioneer names carved in an alcove high in the cliffs, a hike through the jumbled lava fields, and a walk into the deep red sand dunes. Snow Canyon is a small and manageable park. Most visitors can probably experience it in a couple of hours, unless you plan on doing several hikes. We spent about 2.5 hours in the park.

After Snow Canyon, we stopped for a late lunch, and then headed in the opposite direction to Sand Hollow State Park. It took about half an hour to reach Sand Hollow from Snow Canyon, although the driving distance is only about 15 miles. My first view of Sand Hollow was drastically different than I had imagined it. I expected a small reservoir nestled in the canyons, but it’s actually a sprawling 20,000-acre park. The reservoir is also quite large: 1,300 acres in area with a maximum depth of 95 feet. Sand Mountain, a popular ATV recreation area, is to the south of the reservoir.

After a quick stop at the visitor center to orient ourselves, we headed over to the day use beach. By now it was close to 5 p.m. and slightly overcast. Still feeling overheated from the hike through the sunny lava fields in Snow Canyon, we couldn’t help but dip our toes in the water. The 50-degree water. We dared ourselves to go in up to our ankles, and then up to our knees. I looked around and realized that I’d never before seen a red sand beach. It was spectacular.

After a while, dark clouds started drifting in and over the lake. There was a flash of lightening and a clap of thunder. As we headed for our car, the winds picked up, sweeping sand from the beach across the parking lot. The rain hadn’t started falling yet so we drove the perimeter of the lake, where droves of OHVs were making their way down from the dunes.

The atmosphere was suddenly electric with wild lightening strikes, forceful winds, and loud crashes of thunder. The winds blew so hard that the car became covered in red dust — and then it quickly washed away in muddy red streaks as the pelting rain fell in large, loud drops. The deluge of rain fell faster and harder, where even the windshield wipers couldn’t keep up. Around us, campers were running to their vehicles for shelter, even as some tried to salvage their frantically flapping tents from the squall.

Then, as suddenly as it had started, it stopped. As we drove out of the park, the clouds parted to reveal the blue-gray sky. By the time we returned to St. George, it was like it had never even happened, save for the rapidly evaporating puddles and the double rainbow over our hotel.

And then, dinner. A family’s gotta eat! We’d gotten great feedback about Benja Thai restaurant so we showered and changed back at the hotel, then headed over to Ancestor Square. The wait was 45 minutes, so I highly recommend you get there well before you are starving. We debated waiting, even as my daughter’s friend texted her and told us to go immediately to George’s Corner Pub instead. We walked over and saw that the waiting crowds were even larger, so we decided to stick it out at Benja. So glad we did, because the food was fabulous. We ordered appetizers we knew our picky girl would eat: edamame, chicken satay, and crispy tofu plus a bowl of her favorite jasmine rice on the side. We shared delicious pad thai and house noodles. Service was quick, food was delish, and overall I’d say this restaurant deserves a return visit.

We rushed back to the hotel, determined to squeeze in another late night swim. It was a little warmer and less crowded than the previous night. We repeated the previous night’s routine of shower and Dairy Queen, then packed our bags so we would have time to enjoy one last swim in the morning.

The second night’s sleep was much more agreeable, and it was almost hard to get out of bed but we the pool was calling and we still have two more months before we can enjoy swimming under the sun up north. It was surprisingly chilly but that didn’t stop these two Utah mermaids. (Well, for a minute.) We finished with another dip in the hot tub and then headed back to the hotel to shower and get ready to hit the road.

We’re grateful for our two days in St. George, and we will be back. There’s so much left to discover in this beautiful corner of southwestern Utah.

I am constantly inspired by the majestic beauty of the world around me. I strive to create travel content that sparks your desire to go somewhere new, try something for the first time. Just like people, adventure comes in all shapes and sizes. For some, it may be a backcountry hike or a three-week trek through a foreign country. For others, it may be visiting a national park or trying a new restaurant. Do whatever is epic for you.